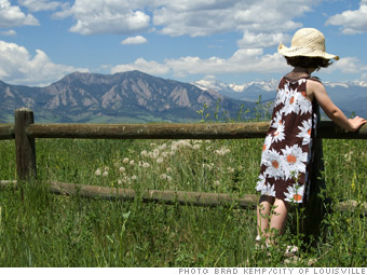 This year, three Colorado towns made CNN Money’s ‘Best Places to Live’ list, solidifying the excellent quality of life and sense of community that is offered throughout the state. Louisville topped the list at number one, Castle Rock landed at number 19, and Parker followed at number 29.

Listed at number one on the list, Louisville, CO has a population of just over 18,000 and a mere 6.1 percent unemployment rate. It is known as a quaint, safe mountain town, and the real estate prices have barely moved since 2005. There are also plenty of activities for residents since the Rocky Mountains are very close by.

Castle Rock, CO, number 19 on the list, has roots in mining and railroads, but today, the economy is much different and improving everyday. A wind turbine parts manufacturer recently moved to town, and officials have set aside $5 million to bring even more businesses to the area. There is also an historic downtown area, 265 acres of parks, and 44 miles of trails.

Finally, Parker, CO, number 29 on the list, maintains a charming ranch vibe, and many developments lie ahead for the town of 41,000. A local reservoir is set to be completed in 2012, and an arts center with a theater, 250-seat outdoor amphitheater, and dance studio are all expected to open by the end of this year.

Once again, Colorado shows that it offers some of the best places to live in all of the United States, and I only expect to see more mentions of its spectacular living on more lists later this year. If you are interested in finding out more about homes and living in Louisville, Castle Rock, or Parker, give me a call at 888-860-1931.